In addition to writing and teaching at the college level, I enjoy bringing my research to a wide variety of audiences. As a guest lecturer and scholar in residence, I have the pleasure of sharing my passion about Jewish history. Possible topics for guest lectures include:

Searching for Coexistence: The Model of Medieval Spain 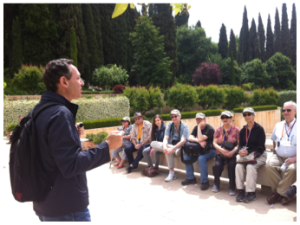 Speaking at the Alhambra, Spain

Jews in Colonial America – Ancient People in the New World

Forbidden Wisdom: The Story of Kabbalah

Religion, Race, or Nation? Re-Defining Jews in the Modern World

The “Golden Age” of the Jews of Spain: Fact or Fantasy?

Heaven, Hell, and the Afterlife in Jewish Tradition

The Jews in the Age of the Crusades

Middle Eastern Jews – Between the Medieval and the Modern Worlds